First of all, I’d like to state that my English isn’t perfect. I admit that I have ‘who’d’ when I should have ‘whom’d’ and that occasionally I’ve had enough of a brain fade to have to check a spelling online.

But, my English is good enough to know the basics. And I don’t think it’s too much to ask for copywriters, designers and content creators to know the same.

The first part of my language gripe is the humble apostrophe. Or rather the quickly becoming endangered apostrophe. The thing here is, that this is such a simple rule. But it’s one that has been flouted for years.

An example. Kings Cross is London. It’s named after the King of England, not a random group of Kings whose paths happened to cross east of Euston. It should, of course, be King’s Cross, but the apostrophe was dropped from street signs because the apostrophe ruined the look… A dangerous precedent.

Luckily, there are small oases still clinging to correct grammar. Thank you ‘Bubbles’ World of Play’ in New Brighton, Wallasey – a world of play brought to us by Bubbles. God bless them.

Don’t get me started on yours and your’s or your and you’re. 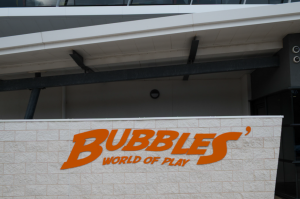