Co-op’s decision to go back to an old logo is a brave one that I think should be applauded.

The old-now-new logo was-is an excellent piece of design that still works in a contemporary setting. And, as they say, if it ain’t broke… It also takes a section of consumers back to the days when the Co-op’s reputation was rather better than it is today – a pillar of the community as opposed to just another chain as it is today.

I think it’s also worth applauding North who eschewed the publicity of a very visible redesign (for it’s own benefit) for a return (albeit tweaked) to somebody else’s work as this was deemed better for the client. And this is surely what design is all about – it’s all about the client’s needs and what works for them and their customers.

We recently did a similar thing at Rusyn Design. We were tasked with rebranding local business Route 39 which was well known and respected within its fields. Following a brand and market analysis we recommended sticking with the current logo (with some minor typographic tweaks) as it had a good deal of brand equity already. The logo was fit for purpose and it would have been very risky to attempt to change it. Instead, we embarked on a complete visual identity based on the existing logo and company ethos. It’s had an excellent response and the client is very happy indeed.

I wonder if Ruddocks ever considered going back to David Gentleman’s original iconic British Steel logo and creating a new visual identity around it with new fonts, lock-ups and other visual elements. If this approach was explored and discounted by the client then fair enough – it would interesting to hear the reasons and the rationale.

Instead we have a shiny new brand. As a stand-alone piece of work it works well. They’ve followed Gentleman’s approach of abstracting the initials ‘B’ and ’S’, but have ended up with a icon that has little relevance to steel-making where-as the original has a real ’steel-ness’ to it. It lacks the weight I’d expect from British Steel.

We shall never know. 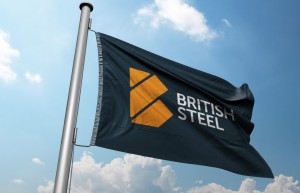